The Epic Mega Sale is currently running on the Epic Games Store – and the ad drum should be done correctly. After Borderlands 3 from the previous week There is now not just another free game – but a collection of the three best titles.

Also this week, the address or addresses that will be freely available have been kept confidential. With BioShock: The Collection, a particularly attractive game package is now offered without a doubt. It includes all three parts of the previously released Bioshock.

In BioShock Remastered, the first journey into the miserable underwater city of Rapture can begin. An ambitious social project fails here – and the player witnesses the failed experiment. The title originally appeared in 2007 and complements the first-person shooter with elements of role-playing games and survival horror. The Remastered variant offers improvements in lighting and environmental details over the original game.

At this point, we would like to show you a YouTube video. However, protecting your data is important to us: by including and running YouTube, YouTube sets cookies on your computer by which you may be tracked. If you want to allow it, just click the play button. Then the video is downloaded and then played.

BioShock 2 Remastered brings the player back to Rapture – but this time in the name of Subject Delta, a prototype Big Daddy searching for his missing little sister. The events of this part of the series take place eight years after the events of the first part. In this part also, the social idea plays an important background role. BioShock 2 was released in 2010 and also received a modified version of BioShock: The Collection in 2016.

After all, the last part of the series so far, BioShock Infinite: The Complete Edition is also part of BioShock: The Collection. But this time, the player is no longer in the depths of the sea, but in the floating city of Columbia. The basic game principle is still consistent with that of the previous parts. In Colombia, the developers of the game want to show the effects of religious intolerance and American patriotism. BioShock Infinite was released in 2013. BioShock Infinite: Complete Edition includes Episodes 1 and 2 of the Burial at Sea expansion and Clash in the Clouds in addition to the main game.

From today’s perspective, the system requirements for all three titles can be managed. For the newest part of the BioShock Infinite Series: Full Edition, at least Core 2 DUO 2.4GHz or AMD Athlon X2 2.7GHz, 2GB RAM, 20GB storage, DirectX 10 compatible graphics card such as Radeon HD 3870 or NVIDIA 8800 GT is required. 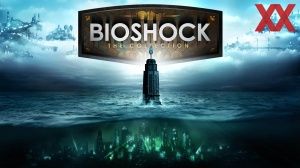