Mercedes and Lewis Hamilton seem to have more stamina in the World Cup final. The Englishman starts from first place in Qatar with a difference of four tenths. This time Mercedes was not faster on the straight, but in the corners.

The US and Mexico Grand Prix obviously go to Red Bull, and in Brazil Mercedes has responded with the same clarity. The trend appears to be continuing in Qatar. Lewis Hamilton put his Mercedes 0.455sec ahead of Max Verstappen in pole position. This is the same delta lap times as in Brazil.

This time, Hamilton will not start from the back, but he will set the pace from the front. Red Bull must fear that the Englishman will disappear over the horizon once he is in the lead. Verstappen has 371 yards to reverse the standings. Then it gets tricky, even if a full-tank Mercedes is never as good as it was in the second half of the race and the car’s balance in race trim and with wind direction can shift in favor of one or the other. “It’s very difficult to stay close to the car in front of you in so many corners,” Hamilton points out.

The track design protects the world champion. If you get too close, you risk underestimating driving. And tires that get super hot before Turn 16. The key to the overtaking maneuver isn’t the 800m DRS, but how well you get out of the last corner. To have a 50 percent chance of overtaking, the man behind you must be at least 1.2 seconds faster.

Mercedes is taking a closer look at what Red Bull is doing with its rear wing.

Qatar’s story will probably be the same as it was before in Austin, Mexico City and Interlagos. It’s not the vehicle and the track characteristics that determine who’s in front of you, but the way the vehicle is set up. The engineers explain: “Red Bull and our car are very close to each other. But depending on how one manages the setup and the other not, there can be huge fluctuations. Sometimes even between qualifying and racing.”

Mercedes quickly found the key to a balanced car with Valtteri Bottas on Friday. Lewis Hamilton was slower with an alternate setup, adjusting his car to match his teammates’ own until Saturday. “We worked on the track until midnight.” Saturday gave the engineers a second assignment. The wind direction in the house switched directly from headwind to tail wind. “Usually it’s better because the wind is coming from the better side in most corners,” Mercedes said.

In fact, this should have helped Red Bull as well, but the opponents were once again busy explaining the seven-kilometer-per-hour deficit at full speed. In addition, problems again occurred with the second largest wing. Cover flap when DRS is open. In the event of an emergency, Red Bull switched to a model with more downforce. Word spread that Mercedes could protest. Flutter has drawbacks, but according to Section 3.6.8. From technical regulations illegal. 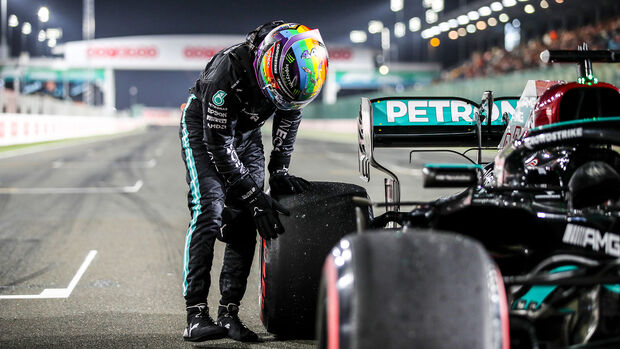 Lewis Hamilton could not be held by any opponent in the playoffs.

Once Red Bull had the big wing in the car, a little miracle happened. The two RB16Bs were suddenly at the same speed over the strait as the Mercedes. But they lost in the corners. Especially in Sector 2, where Verstappen fell 0.257sec on Hamilton. “Mercedes is killing us in Turn 6 and 7,” Red Bull boss Christian Horner complained. His opponent Toto Wolff analyzed: “Red Bull probably didn’t get the balance with the new rear wing. And at top speed I can imagine Honda will be putting out more power at the end of the season. The engine seems to be bulletproof.”

Valtteri Bottas was less satisfied. On Friday the Finn was the fastest man on the track. “I’m confused. Something happened overnight. Yesterday I felt really good in the car. In qualifying, I had problems in the first corner. I never got the tire temperature in time.” Then the Hamilton water carrier announced, as if warning Verstappen, “I have nothing to lose. We’re two against one. It’s a comfortable situation.”

Speculation that Verstappen could risk completely in the first corner could be invalid if the Dutchman receives a penalty for ignoring the yellow flag shortly before the end of qualifying. Wolff tried to get out of the discussion quickly: “We’re not assuming that anyone wants to decide a world championship through a meltdown.”

A new episode in the rear wing dispute

The rear wing dispute is burning right now. Red Bull distributes images of the scratch marks to the wing end plates and concludes that the main blade is moving. We hear from the Mercedes warehouse that the so-called traces are a transition from one carbon layer to another. Red Bull has stopped the threatening protest for the time being because the FIA ​​wants to tighten rear wing testing. In Qatar as an apprenticeship on a potential technical direction adjustment.

Toto Wolff can live with both protest and experiment. “You’re welcome to check out our wings. Then at last it’s off the table. Does anyone really think we’re so stupid as to appear in a race with an illegal wing?”