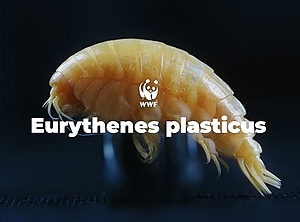 In the 2021 creative ranking of the marketing magazine “Horizont”, the “Eurythenes plasticus” campaign launched by the environmental protection organization WWF Germany (WWF, Berlin) took first place. With more than 90 awards, the project is by far the most award-winning campaign of the year, the newspaper wrote. The “Eurythenes plasticus” campaign was developed by advertising agency BBDO Group Germany in collaboration with scientists from Newcastle University and the World Wide Fund for Nature in Germany.

A campaign to draw attention to the pollution of the world’s oceans with plastic waste began in March 2020 after marine ecologists discovered a new species of amphibian off the coast of the Philippines at a depth of nearly 7,000 meters in the Mariana Trench. Since a PET filament was found in the animal’s rectum, which was only a few millimeters long, the new species was officially entered into the planet’s taxonomic record under the name Eurythenes plasticus. According to the WWF, the multi-channel campaign, which included social media, cinema websites, outdoor advertising and museum partnerships, was staged in Germany, the USA, Australia, New Zealand, Austria, the Netherlands, France, Finland, Italy, Romania and Latvia, among other countries. The response of the audience was enormous: the media reported “Eurythenes plasticus” in 93 countries around the world.

Bayern Munich: Additional transformations!: This is how De Ligt fights for his defensive position | Sports

Will SUEZ take off in the UK? – EM – Removal Magazine