This Ferrari 400i stretch limousine will be auctioned off in the USA. A rare Ferrari recently went to its owner for $20,000 USD.

The new owner wasn’t too happy with his new car. We’re talking about the Ferrari 400i as an extended limousine. The white Ferrari wasn’t sold at an auction in Glenview, Illinois until November 2021. The buyer had to pay just $20,000 (€17,960) to the Italian. But just three months later, the 400i was once again up for sale at auction. This time in Scottsdale, Arizona. Auction house Barrett-Jackson is now trying to sell the curious Ferrari again until January 30th.

Admittedly, the Ferrari 400i probably won’t go down in automotive history as the most beautiful car the Italians have made. The body comes from the legendary Pininfarina design studio. A Ferrari that would be auctioned wouldn’t be nicer because of the private conversion. The coupe became an extended limousine. Originally, the Ferrari 400i was 4.80 meters long. As an extended limousine, the Italian probably fits very few garages.

The original body of the 400i comes from Pininfarina design studio.

A 4.8 liter V12 engine rumbles under the hood. Downsizing was a foreign word during the 400i’s production period in the early 1980s. The Italian extended engine is said to produce 340 hp. Slightly more than 310 hp of the production model. Ferrari built the 400i from 1976 to 1985, and from 1985 the car was renamed the 412. Four people can be accommodated in the classic 400i. Of the total of 1,305 models, Ferrari produced 883 with an automatic transmission and 422 with a five-speed manual transmission. The converted extended limousine also has an automatic transmission, but it makes room for up to six people. 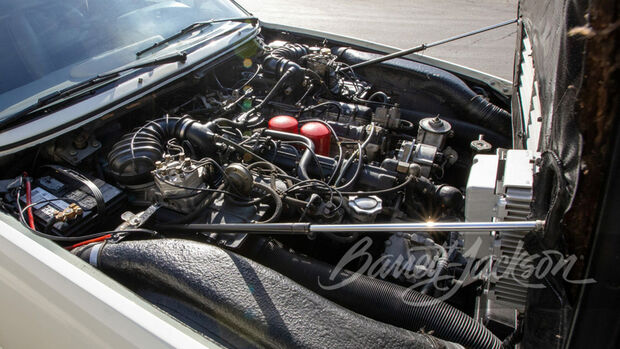 A quick look at the Ferrari’s odometer reading is a surprise: the sedan has only traveled 15,000 miles (about 24,140 kilometres). That’s not much for a car from 1981. Despite the lower mileage, the 400i struggled with the rust problems that were common at the time. But it must be completely eliminated. Restorers stripped the Ferrari down to bare metal, painted it, and then reassembled the 400i. Thus, the body should not cause any problems in the coming decades. The extended limousine was recently fully inspected. There the mechanics replaced all fluids, battery, oil and spark plugs. The brakes and tires also received service. The rims and wheels of the 400i take a while to get used to. At first glance it seems obvious: something is wrong here. At the request of a previous owner, Ferrari acquired different tires and rims. Does that make it prettier? Oh well.

TV screens and refrigerator at 400i

The highlight of the stretch limousine is, of course, the rear area. Screens can be collapsed from the title. There is also a refrigerator. A cold drink or two with the corresponding TV show should lift spirits at Ferrari. Light strips above the cup holders. It should provide a nice ambient light.

Ferraris designed by Pininfarina bring back memories. Many car lovers begin to dream of such iconic models as the Daytona or the Testarossa. The Ferrari 400i does not necessarily belong to this category. Even less of a stretch limousine. On the other hand, you probably won’t find another Ferrari with that miles for $20,000.

Boris Becker was transferred to “I feel happy” prison!