NASA was able to use one of its sensors to capture an interesting image showing Jupiter in the new light – or more accurately, in the shadows. In a very close flyby, the Juno spacecraft was able to capture the moon Ganymede and cast a shadow over the gas giant.

Jupiter always makes a very impressive sight with its wrapping cloud cover that circles the entire planet. On its 40th flight, NASA’s Juno probe, which has been scanning and photographing the Jupiter system since 2016, captured a particularly fascinating photo. A giant black spot appears on the known surface background.
Juno captures Ganymede’s shadow on Jupiter

Such as NASA Explain, Juno took the photo from a very low altitude, and the gas planet can be seen here from only 71,000 kilometers away. Ganymede casts a black shadow over the cloud cover, one of Jupiter’s four large moons. The satellite was 15 times further from the planet at the time of recording NASA probethis gives the impression of an elongated, rounded shadow. 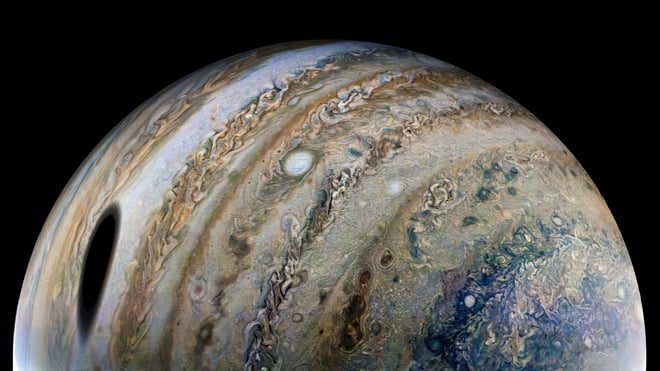 Often more than the earth

Scientists enthusiastically describe “an observer at the tops of Jupiter’s cloud within the oval shadow will witness a total solar eclipse.” The hypothetical inhabitants of Jupiter can often enjoy this experience. Solar eclipses happen significantly more on Jupiter than on Earth for a number of reasons.

The first reason is, of course, obvious: instead of just one moon, Jupiter has four large moons – Ganymede, Io, Callisto and Europa. Moreover, the satellites orbit in a plane close to the orbital plane of Jupiter, causing shadows to be cast on the planet.