A deep look into space doesn’t always provide a clearer picture: Hubble has reached a new milestone in the mystery of the universe’s expansion rate. After three decades of scanning the universe, scientists have noticed something “strange”.

Astronomers Edwin B. Hubble and George Lemaître were pioneers in measuring the expansion rate of the universe in the 1920s. Almost 80 years later, against the background of this observation, the theory of “dark energy” emerged, a mysterious force that is pushing the universe apart by repulsion. Solving this mystery was one of the main motivations behind the construction of the Hubble Telescope. His mission: to raise the scales of the so-called “cosmic landmarks” to a new level.
36 Hubble images show galaxies in which cepheids and supernovae occur

Among other things, so-called Cepheids, which stand out in our own Milky Way and nearby galaxies by their periodic brightness and darkness and enable reliable distance measurements, are being targeted. In order to measure larger distances, one focuses on certain types of supernovae. Together, the objects form an estimation of distances in the universe that science has dubbed the “cosmic distance ladder”. All assumptions about the expansion rate of the universe, called the Hubble constant, are based on this.

Now you can NASA He reports that after nearly three decades, Hubble has completed tracking all of the “landmarks” prepared for a survey. According to the recent publication by Nobel laureate Adam Rees, this more than doubles the samples of cosmic distance markers available to date, with the full data set now covering more than 1,000 Hubble orbits.

And what does the best picture we’ve seen tell us about the extent of the universe? There is a great discrepancy between the expansion rate of the local universe as we observe it today and the rate of expansion of the primordial universe that we cannot explain. “The reason for this discrepancy remains a mystery,” the researchers said. “But the Hubble data, which includes a variety of cosmic objects that act as bandmarks, supports the idea that something strange is going on, perhaps with entirely new physics.” NASA.

The next step in the search for an answer: this James Webb Space Telescope He will continue Hubble’s work, measuring cosmic features at greater distances and with greater precision. It will be interesting to see how the mystery that has occupied astronomy for 100 years will continue.
Behind the Hubble Infographic: The James Webb Space Telescope in detail 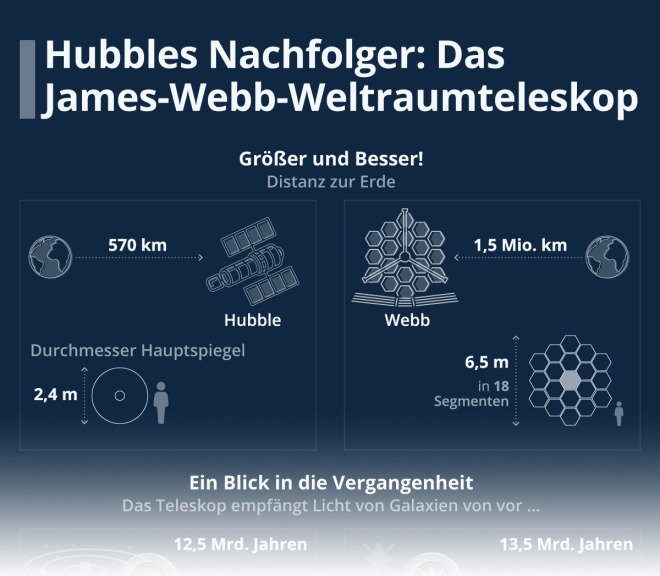