Haas boss Guenther Steiner’s plan worked. The new Haas VF-22 is almost as standard as a Mercedes. Kevin Magnussen finished seventh on the grid despite hydraulic issues, and Mick Schumacher stumbled after a foul in turn 11.

It was a risky plan. Haas struggled in the back of the field for two years to focus fully and early on the 2022 car. With this tactic, BrawnGP became world champion in 2009. 13 years later, Haas jumped right from the bottom of the table into the top ten of the starting grid. This is actually impossible in modern formula 1.

The season-opening qualifiers in Bahrain showed that this is possible. Kevin Magnussen started the first race of the year from seventh place. And there was more. The Dane missed his second-quarter time by four tenths in the final knockout round of the playoffs. At the end of the search for time, he almost did not drive at all. After his second quarter lap, Magnussen reported a solid power steering. An inspection of the box revealed a hydraulic leak.

Kevin Magnussen delivered a solid performance upon his return.

Pray for Round Q 3

At that point, the Haas driver was well ahead of the two Mercedes drivers at lap time. “I thought I was dreaming.” But then there was a shiver. Magnussen had to give up on the second attempt because Haas mechanics were trying to correct the leak. “We didn’t succeed,” COO Io Komatsu lamented. “So it was clear that Kevin was only allowed to drive one more lap in Q3. We all prayed to survive.”

Magnussen was directed to do the entire warm-up lap in fourth gear to loosen the hydraulics. “Of course, the tires weren’t in the right window.” There was also the problem that hydraulic oil was constantly escaping and there was a danger of it splashing onto the rear tyres. Under the circumstances, seventh place was the best possible result. “If Kevin was driving at the same time as in Q2, we would be sixth,” Komatsu says angrily, adding, “What a feeling you can get mad about missing out on sixth.” “In the past two years, we’ve only dreamed of putting 7 and 12 on the grid,” added team boss Guenther Steiner. 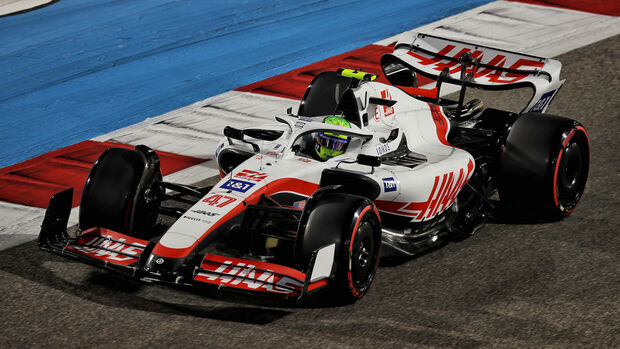 Mick Schumacher’s mistake cost him a place in the third quarter.

Kevin Magnussen was speechless. Two weeks ago he was a former Formula 1 driver. “15 months after the last race I had just realized the fact that Formula 1 was no longer a part of my life. Then I got a call from Guenther. I said yes straight away. During testing, after a few rides When I set my best time on day two, we still had the right amount of fuel on board. That’s when I knew we were playing music.”

29-year-old Dane compared the past few weeks to riding a roller coaster. And that went on in that qualification.” The speed of his car does not worry him. The stability. Because there were also many small flaws during the test drive. “If we finish, we will be able to finish the points.”

Mick Schumacher hopes so too. In twelfth place on the grid, the German has a visual connection with the top ten. However, he would have liked to be at a higher level than this realm. “We had Q3 speed.” Error 11 in turn prevent climbing. Now it is important to take advantage of this moment because some of the big teams are still in normal shape. “We have a good car that can score points. Now it is important that we continue to develop it properly so that we can maintain the lead over our competitors.”

Ecumenical service for the DFB Cup Final / “What is important to be on the field?”

Hubble’s Magnum: A new landmark for the Hubble constant