BMW is returning to prototype racing after a hiatus of more than 20 years. From 2023, the Munich team will compete in the US IMSA SportsCar Championship with an LMDh race car. In 2024, BMW could also compete at Le Mans with the M Hybrid V8.

BMW’s return to prototyping is getting faster. On Monday, June 6, the automaker presented in Munich for the first time the new racing car named “M Hybrid V8”. Starting next year, BMW will compete in the US IMSA racing series with a 700-hp prototype.

The M Hybrid V8 engine is based on the cost-effective LMDH regulations and is recognizable as a BMW at first glance. In return, the designers gave it the typical kidney grille, which is as large as in production cars, but much wider and wider in racing cars.

Thanks to the large overall, the M V8 Hybrid is recognizable as a BMW.

Two holes are punched in the front end of the side of the kidney. Below is a spacer that provides contact pressure on the front axle. BMW has included the 50th Anniversary of M GmbH logo on the front end. The wheelhouses are ventilated in the upper part. After that, mirrors of aerodynamic shape can be seen.

Other features include the rooftop snorkel, the vertical “sail” on the hood, and the Hofmeister grille. Headlights and taillights are among the typical BMW design elements. The BMW M V8 Hybrid will also wear camouflage paint during the test drive. Munich residents want to celebrate five decades of racing history in the United States.

V8 from DTM times – with turbo

At the same time, the appearance should define a dynamic future for hybrid electric. This brings us to the heart of the race car. BMW’s new LMDh has an eight-cylinder, turbocharged, four-liter engine. However, this is not the engine from the old BMW M8 GTE, which the manufacturer drove at Le Mans until 2019, but the old DTM (P66) engine, which BMW converts to turbo technology.

With this decision, the M Hybrid V8 is in good company. Other manufacturers such as Porsche also rely on large displacement, many cylinders and turbocharging. Background: So you should be able to cover all conceivable services that can be imported through affinity and performance balance in the new top tier.

Both at IMSA and at the World Sportscar Championship (WEC), hypercars and LMDHs are mixed in first class, which must be reconciled in terms of performance. LMDh cars are a US-inspired concept prototype that allows manufacturers to combine the LMP2 chassis with their engine and design. 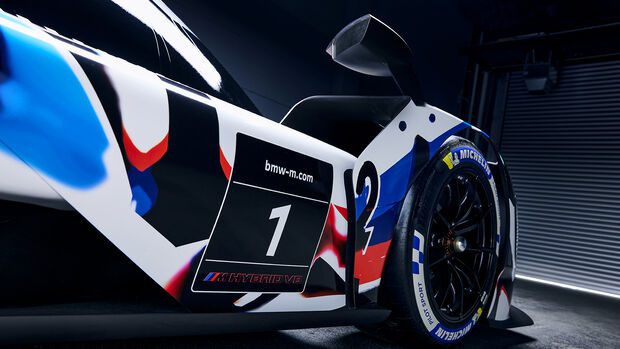 BMW wants to fight for wins in the classics at Daytona, Sebring and possibly Le Mans with its LMDh.

In addition, a standardized hybrid system is described. This structure was developed and built by Dallara professionals; The Italians formed an engineering team exclusively for BMW. The system output for both classes should be 500 kW, i.e. 680 hp.

BMW plans to introduce the M Hybrid V8 engine on July 25. The first real test should be in August, perhaps in Spain or Portugal. The first race is scheduled to be the 2023 24 Hours of Daytona, part of the IMSA North American Sports Car Championship.

Another highlight of the IMSA Series is the 12-hour race at the Sebring International Circuit, which BMW last won in the 1st Class in 1999 – the same year as the 24 Hours of Le Mans. BMW may aim to return to Sarthe in 2024. There Munich will then compete with Ferrari, Porsche, Toyota, Peugeot, Acura & Co..

After exiting DTM and ending the business commitment to Formula E racing, BMW has a really big business program in its portfolio once again. BMW Team RLL, with which BMW M Motorsport has been working in North America since 2009, will offer the first two LMDh models from 2023. Following Audi’s withdrawal, the successful Belgian team from WRT will be the ideal team for Le Mans. A decision on that will not be made until 2023.

Returning to Sarthe would make perfect sense for BMW. Bavarians can send their car to start in both the USA and Europe. As one of the biggest races in the world, Le Mans will therefore be an attractive advertising platform for the manufacturer. 2024 also marks the 25th anniversary of the last and only victory in the 24 Hours of Le Mans, when the legendary V12 LMR triumphed. It looks like a round thing.