The plans for a hiking car park have changed again with a mobile home parking lot in the Bad Schandau district of Ostrau. This is the result of field visits with Sachsenforst and the National Park Administration as well as coordination with the Pirna County Office. Even before the official round of participation as part of the development plan process, the first indicators were incorporated.

A hiking car park with camper parking spaces will be established on a private initiative. The operators of Ostrauer Hof want to build it in an open space next to their holiday apartment complex. Part of the meadow has already been stopped in the past, which has led to criticism from residents and authorities. With the development plan, everything must now be directed in an orderly manner.

As per the current situation, a public hiking car park has been planned with approximately 50 parking spaces as well as an area for mobile homes and campers for up to 30 vehicles. The mobile home area includes a small sanitary building with a shower and a public toilet, as well as a chemical toilet drain station and a fresh water point. However, according to the planners, it is expressly not a camping site.

RVs, but not the campground

The mobile home parking space will run from March to October and is open until 9pm during the season. This is to prevent continued traffic congestion due to arrival and departure even at night. Additionally, during the planning stage, operators still have to submit a noise emissions report that reveals that exposure of residents and other guests to noise remains within limits. The hiking car park for day visitors is public and should not have any barriers. However, fees will likely be due.

The planned area borders the landscape protection zone to the north and east. As far as the box itself is concerned, the space’s balance is balanced according to landscape architect Bernhard Hase. Trees in a depression could remain on the site, as could a row of trees in the south, known as orchard meadow, which act as a demarcation of the road. Additional new trees will be planted on the northern edge. In the presentation at Bad Schandau City Council, the planner said that the square blends harmoniously with the existing landscape.

The mobile home playgrounds themselves are designed to be paved with water and surrounded by hedges. There is a fixed barbecue area, barbecue and bonfire are only allowed there, not directly on the caravan. This ensures protection from fire.

Plans are presented to the public

Access to the mobile home location and hiking car park of Falkensteinstrasse at the Klüftelweg level. The small car park located in the Ostrauer Hof and the entrance to the building itself are separate from this. This should prevent traffic problems.

It was originally planned to build a cardiac rehabilitation clinic on the site in question at the entrance to Ostrau. As the third clinic in addition to the Falkenstein Clinic in Ostrau and the Kernitzstalki Hospital, it will complement the current offer. It was ultimately not possible to implement these plans from the 1990s, although building permits already existed at the time. 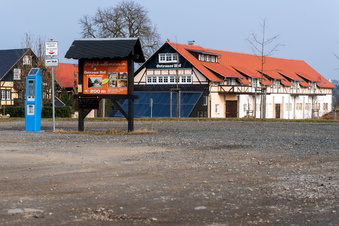 It is now necessary to come up with a new development plan for the construction of a hiking car park and a parking space for a mobile home. Bad Schandau City Council has already approved the initial draft, and residents can now contribute tips. As part of the public participation, planning documents will be on display to the public from 15 November to 23 December at Bad Schandau City Hall. Plans should also be available on the city’s website.

Basel honors Hermann Hesse with a festival and a venue